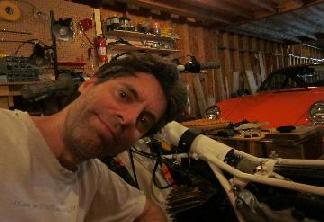 RJ White, despite being a 9th dan and co-founder of the internationally successful martial-art Bat-Jitsu (the meld of Ju-Jitsu and Baseball), is a pacifist and only beats the crap out of people that really deserve it.

Using his no-skills approach to advancement through corporate warfare, RJ quickly became Director of Systems at Canadas largest ISP where he got distracted by the stock-Put and took his money and ran. After a long break and huge spending spree, RJ then went to California in need of a salary again.

After stints as Director of Engineering, Technical Services, etc, RJ experienced growth of character through negative finanical growth brought on by the DotCom bust, and returned to Canada. Having worked his way back down the corporate ladder, he is now enjoying a return to being an Unemployed Bum (which he calls consulting)

You can contact RJ by e-mail at rj.white [at] moxad.com * the name Moxad comes from MOst eXcellent ADventures and is pronounced mocks (rhymes with socks) add.